One Phrase at at Time 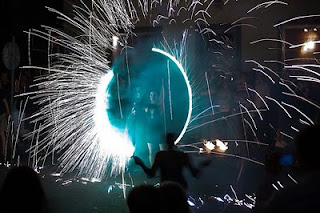 
I began practicing at 11am, wish I could do this more often. In preparing for the upcoming performances this week I have continued to apply the principles of the Alexander Technique. This has meant more time spent with working with how I "use the self," which has taken away from time spent on 'playing notes.' In embracing the technique in this way I have also introduced much confusion in my playing. At times thinking of the directions while playing, judging myself for how I am applying AT or not, and wondering when I'll find my way through this. Recently I feel as if I have turned the corner, reaping the benefits from my recent AT practice

Today I began my practice with using the Guitar Craft primary for cross - picking, but using finger picking instead.  I have always loved this simple theme, finding it soothing and focusing. I paused between each six note segment of the theme. Giving the AT directions, releasing, lengthening, widening, and in doing this simple breakdown of my playing I noticed subtle aspects of my right hand fingers at work.

I moved on to the new piece Steppin' Stones, which is a piece that I am very much still learning. I decided to break it down one phrase at a time to see what I could learn. The intent was to pause between the playing of the phrase to give myself the AT directions and to unveil areas of my playing that needed clarification. In the opening phrase I heard again the one hammer-on that has been played carelessly for long wnough to now be the way it is played. I had to further break down my investigation to just the notes prior to this hammer-on. Then I moved the pattern around the fret board to look at it. Finally I saw and heard what is going on. Giving the directions again I played these notes. I worked with this until the hammer on was reliable and took a break. All told this had taken close to 15 minutes on just this one phrase.

During the break I did 20 minutes of Qi Gong, further releasing unnecessary tensions, and allowing my bodies energies to move around. Back to the guitar and I played through the opening phrase and was satisfied. On to the following phrase. I continued in this manner through the first two sections. No other issues as major as the first phrase were observed.  I noticed that in general my playing of these other phrases were improving as a result of the work that had been done on the first phrase and my overall working with paying attention to "my use of the self."

I arrived at the trickiest part of the piece with the triad power pull-offs that I had written about earlier this week. Working in the same manner as above for a few more minutes I realized I was loosing my attention. I sat for a bit and then returned for a few minutes of clarifying work. Recognizing that I needed a longer break I decided write these notes.

Now it is 12:20 pm and time to return to the guitar. I worked on the opening notes of this phrase a bit and then moved on the entire phrase. I played it beautifully twice with the pause in between and after the second play through. I was ready to break for lunch but decided to go for one more time. A couple false starts and then the pause for directions again. A good play through, pause, and another beautiful effort. Decided to address the final section later and allow this practicing to be digested. Where's the PBJ sandwich?
Posted by Patrick Smith at 10:12 AM