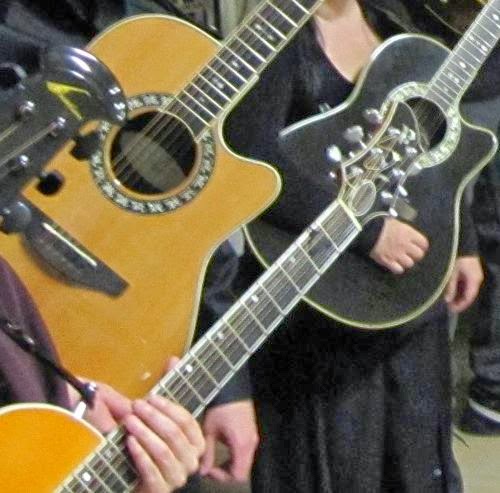 At the suggestion of Curt Golden I began my practice this afternoon on my feet.  Walking through the various rooms of my home, arpeggiating a Dm minor chord.  Can I walk softly as I play, not adding anything nor taking away anything from the chord that is sounding?  What happens to my attention as the sound changes from room to room?  What happens to my attention as I am drawn to different object or aspects of the different rooms?  Do I react when the floor boards between the living room and dining room creak?  Yes actually, not in any major way but there was a reaction.

What happened next was not planned, but I did embrace the notion.   On Thursday Curt practiced 90 minutes on his feet.  When I found this out it was too late in my day to undertake this, but I did file the idea as one to investigate.  As I will be part of the Orchestra of Crafty Guitarist IX next month in 4 performances in the Pacific Northwest, this is roughly the amount if time we will be performing.  Other than with my engagements with the OCG, I do not spend this much time on my feet with a guitar.  I prefer playing seated.  Thus less than 5 minutes into today's practice I decided to go for the 90 minutes and to see what I would learn.  Almost immediately the excuses began.  I would have taken a drink first if I had planned this, maybe even used the rest room.  Tough.  Decision made.  I know that unplanned obstacles will arise within a live performance context so I'll deal with these two if they arise.  Then what if Joann calls?  My wife is traveling and our opportunity to connect will be limited.  I did decide that if she called I'd answer.  Twenty minutes into the practice she did.  I removed the guitar and remained standing.  Four minutes later she needed to go, so back to the guitar.

Part of the time I was working on Eye of the Needle and observing my right wrist in the mirror.  Just as I noticed one evening this week, when my right elbow is relatively free, my picking improves.  If the right elbow is tight against the bout of the guitar this translates into unneeded tension in the wrist.  I practiced pausing and directing with the Alexander Technique to address this.  I moved onto an arpeggio exercise and when I noticed an error, I would pause and direct.  As my upper torso gained a measure of freedom, I noticed I was "holding on" in my hips.  Particularly in the left rear area of what I call the hip, though the exact musculature may be something else.  I have not noticed this before, but by this time I'd been standing with some degree of directed attention for 35 minutes.

Is this related to my old knee injury?  Some type of "lifting or holding" of a muscle to compensate for damage in another part of the limb?  Could this have led to my bone spur?  Directing my Qi through this region I noticed a letting go of the hip and a slight shift in how my left foot was meeting the floor.

At this point my left hand was getting fatigued after nearly 40 minute of continuous playing.  Certainly there will be part of the performance where I will need to stand quietly, so this is a valid and necessary part of the process to address.  Standing quietly I wondered how long should I do this?  Certainly there could be 10 minutes of more of this required at any given point, so I choose 10 minutes as a period to practice standing with my guitar.  My right hand muting the strings and gently holding my pick.  Realizing that the I was now in the middle of this practice period, I wondered what distracting struggle might arise.  Then the pick slipped out of my hand.  As I was practicing alone, not in any performance mode I did not have an extra pick on me.   Ahhh the mind began to race, whatever poise and presence had been cultivated, was now disrupted by judgements and how to get out of this.

This lapse of attention made the remaining 6 minutes of standing almost frantic at times.  If this truly arose during performance how would I resolve this?  Bending over within a group of 60+ guitarists in motion could be dangerous.  Doing so while standing quietly while others performed, a selfish distraction.  Better that this mistake arose in an unplanned practice session.  My habit is to carry one pick with me and to have one in each pocket in a performing context, I think this will now extend to practice.

Around the 70 minute mark, fatigue was established.  Should I abandon the practice goal of  90 minutes?  My mind began to rationalize that this was a form of end gaining to put it in AT terms.  To push on, knowing my use was suffering. But was I end gaining?  I was seeking information.  Fatigue could arise in performing despite the energy of the group.  Noticing that my head was looking down much more of the time as I played now, I paused to direct.  Allowing my neck to release and to direct my head forward and up and relieve my spine of the strain I was noticing.  Now I wanted to just stretch my arms out wide, certainly a valid exercise, but could I do this in a performance context?  Better to continue with directing my thinking along AT lines or to  follow my breath.  Standing and directing, releasing and learning that yes today I am not prepared for this.  Around the 78 minute mark as I was playing a piece, I noticed the area around my bone spur begin to ache.  A sign that I should stop, or was it a sign to practice alleviating what was causing the stress?

Directing energy there, can I allow my foot to be wide and long?  Can I gently approach the end of this practice, knowing that there is still time to address stamina, and that within the context of the OCG, there will be the energy of the group to support my efforts.  Just that thought allowed me to continue, to come back to listening and playing; to be gentle with myself..  At 4:10 pm EST, I stood quietly and completed my practice.

For those interested in more information about the OCG IX course or for the tour of the OCG IX.
Posted by Patrick Smith at 2:38 PM