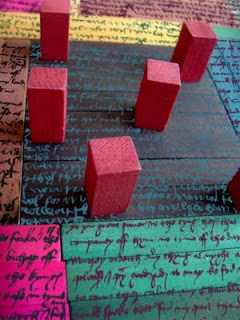 Trust. What is trust? Is it learned? Earned?

Listening to an excerpt from Stones off of This Fragile Moment as I type. Toyah words juxtaposed on my own are generating interesting & fleeting thoughts. Should I keep this excerpt on repeat as I type? " It's a beautiful question ... but your answer is wrong ..."

Since playing the benefit Saturday night I have not played an established piece. On Sunday a new piece inspired by the notion of Frames that I have been holding came out. I was exhausted in Sunday and in this slowly paced piece just followed where the next note chose to be. Quick notation and a rough recording to mp3 to secure the idea.


Stream Ohrstrom and the Blue Dragon Band was the final act at the benefit on Saturday night. I met Stream in my early days of Guitar Craft when struggling with odd rythms. Tony Geballe suggested I get a set of Bongos to work on  rhythms so as to just focus on getting them down and not concerning myself with the challenges of playing the guitar. I went to HMT and Stream introduced me to the dumbek, a middle eastern goblet shape hand drum that I fell in love with. I played the thing in the car as my now wife drove to Baltimore to visit family. What a woman!

I took lessons with Stream for some time and enjoyed many musical moments with him alone and during the weekly Beat Jam that he still hosts on Friday nights. I recently reconnected with him in October and he recalled how my favorite rhythm then was a pattern of 31, with both of us playing it differently but syncing on the one.

On Monday evening when I sat to practice I again began investigating where the notes might take me. An arpeggio in seven appeared and was followed by one in six. Another one in seven and then I hit on the framework of 31. A structure of 7,6,7,6, 5. I played with this for the next hour and 45 minutes, not even stopping to get a drink of water. Something emerged. I can not play it yet so no rough take with the mp3 recorder. Thought I might work with it tonight but...

Another piece emerged. Quiet & mysterious. Notated and recorded and then played for Joann twice.

Where does music come from? Why does music come into being?  A recent conversation with Robert about performance had him telling me that music is always available. While I have heard this before I heard him differently this time. The challenge is for me to be available to music.  Can I trust music to be there? Yes. Can I be available?

I am not sure why the creative output this week. I suspect it has something to do with the focus of the past weeks preparing for the performance. For now I am just trusting the process. And returning to listen to Stone one more time ...