Learning as I Go Along 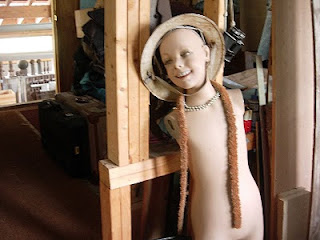 Photo by James Landry
I arrived home early on Tuesday so I was able to warm up and play prior to my Alexander Technique class. I worked on the beginning of Dancin’ Free which is difficult still and improvised in C Hijaz. Slowly this scale is revealing her soul to me I thought earlier. Now I am seeing that perhaps I am revealing my soul through this scale. Increasingly trusting that music is present, am I present remains the task.
Spoke with David about AT applications during potential emotional times. In one instance I had already begun to react but then stopped and gave myself the directions. This action allowed me to listen and consider, rather than get angry. Amazingly an alternative strategy arose between the two of us. Another was a conversation where fear was being presented to me and I choose to free my neck, lengthen, & widen while listening. The subject matter has huge ramifications over time, yet on this day I was able to not react to the fear.
The other student present tonight R. spoke of an issue with ‘needing approval’ for her playing. David asked how I would handle a similar situation and I said that first I would go inward and find my breath, then I would find my body and give the AT directions. He asked what I would do if there was not enough time to go inward? Alexander suggested that something along the line that we ‘not do our habitual thing?’ David offered the directions to R. and I followed along. At one point he suggested she ‘play with open eyes and open ears’ and a dramatic shift in her tone occurred.
I mentioned that I had recalled the Whispered Ahhh exercise and that this might be useful. David had me review this for R. A piece I had forgotten about this exercise was to think of a pleasurable or perhaps humorous anecdote before doing the Whisper.
During my time to play I chose to Dancin' Free.  I stood while playing, still a relatively new approach for me. Tonight I played it strong, and confidently. We spoke of how to keep AT going as the piece progressed. David’s response was to “Choose to come back to the thinking.” As in coming back to the breath, come back to thinking about the AT directions. Basically the same part of our brain that allows me to come back to my breath, would be used to give myself the directions.
Came home and played through Kinnara with my ears open, eyes open. Still playing with the dynamic phrasing of this piece. The second time through I found the phrasing I think works well. I noted this on the score. Need to record this and then listen. Improvised more in C hijaz. Also ran through Dancin’ Free and Livin’ the Dream.
Posted by Patrick Smith at 6:43 PM