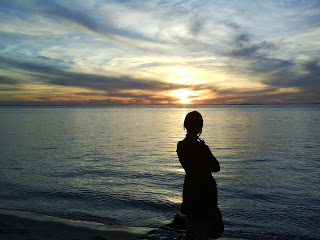 While practicing tonight, I was playing a slow piece, Kinnara, which I have not played in a while.  I was also working with the Alexander Technique, allowing thoughts of freedom, to guide my movements.  Kinnara is slow enough that I could more or less pay attention to the sense of energy in my arms. Then a mistake in the piece occurred and I noticed my right shoulder gently pulling my arm back and maybe even up a bit.  Pausing, I gave the AT directions, and began playing again.  Two more mistakes in the same part of the piece, each time I noticed a slight pulling back of my head.

Subtle reactions, certainly much less dramatic reactions, than those I had in my youth to mistakes.  But these reactions, disrupt the flow of my use, and contribute to unnecessary tension as I continue to practice.  And I'm certain they happen all the time, but tonight I noticed and was able to exercise a choice to begin again by directing my thinking.  I worked with thinking of the directions while playing the piece.  Making some 'intentional mistakes' did not cause a reaction. While playing through a section I had forgotten, I did not notice any pulling nor tensing of my neck nor shoulders.  One key here is that I did not notice any, this work is subtle, some poor use may have been occurring beyond my perception.

I moved onto playing Gathered Hearts, keeping the directions alive while also hearing the piece in my mind.  A good exercise that kept me focused and relatively free.  Playing a couple harmonics, I was off chasing the muse.  The tones were generally long and somewhat sparse and of course the hour was getting late.  But I followed the idea and notated what I was finding.

After using myself poorly while notating and playing earlier this week, tonight I worked a bit differently.  Using a clipboard and the music stand; even taking the guitar off several times, returning to the the AT directions.  Slowly the piece unfolded and then appeared to be complete.   Stretching I noticed a collection of poems, stories, & letters by Rumi on my shelf that is titled This Longing

.  Smiling as I knew I now had the title for this piece of music.  I recorded what I had and then completed my practice.  As we approach midnight, I'll wait until morning to edit this.
Posted by Patrick Smith at 6:28 AM