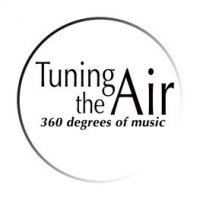 Tuning the Air hosts a monthly open circle on the first Saturday of the month in Seattle. I usually practice on Saturday afternoons so this week I decided to align my practice time with theirs. I announced to the team that I would join them at a distance. I had to hustle to be back home in time to have a small lunch and be ready to join them at 1pm EST as they were scheduled to begin at 10PST.

I chose to focus this practice session to learning something new.

I warmed up with C hijaz, gently improvising, finding bits of melodies I liked, looking at relating them to earlier bits. I was going to look at triads in this scale when I decided to work with offbeats. In a five beat measure I was going to play a note from the scale on the offbeat of 1,2,4,&5. Quickly I was amazed at how difficult this was for me. I noticed how often I was holding my breath while working with this.

I set the metronome at 80bpm and began to work. Before too long I backed off to 72bpm. Eventually I settled on two four note patterns to play so that I just focused on being in time. Unfortunately I usually tripped up in the transition so I stayed with the first pattern for about ten minutes. Counting out loud assisted my playing this in time. Slowly I kept the count internally. After 20 minutes working with the metronome I let this go.

I moved on to looking at the beginning of the Etude that Tony Geballe has composed for me. I commissioned him to write a fingerstyle Etude taking into account where I am as a player. I had not looked at this for  while but decided now is the time to learn this piece. Slowly I reviewed the notes of the first bar of five. As I gained familiarity with them I introduced the metronome. After 15 minutes of this I took a break at 2pm EST by doing an Alexander Technique lie down.

Just before departing from the floor I reviewed the notes of the basic pattern in my mind. I rose at 2:15 to begin the guitar work again. The remaining time I spent learning the first 6 bars of this Etude.I nearly let go at 2:40pm. I was ready for a snack and thinking off an errand I still needed to complete. However I drew on the energy of the team that was working and resumed my practice. I am glad I did as the opening bars of the Etude began coming together.

At 2:51pm I decided to complete the session by playing Gathered Hearts. I sent good wishes to the team and played. I then sat quietly until 3pm.
Posted by Patrick Smith at 12:29 PM