Another wonderful Alexander Technique class with David Jernigan tonight. R. has returned from her travels and a new student Rl was also present. This was the first exposure of Rl to the Technique and it was interesting and refreshing to be there with him. I was able to stay with what David was suggesting in words to each student and keep the directions active in my own thinking. I have found this useful in the past and especially so tonight.

After having wrote the above line, I paused and invited myself to lengthen and widen by using the AT directions. When it was my time to play guitar, I choose Kinnara. A simple piece with a haunting mystery when played well. Of late I have been unable to play this piece well. This began during the live recordings last month and I continue to get lost in my thinking or fingerings. Never one to be easy on myself I decided to face the mirror to play. Then I decided to not look into the mirror & go inward. David stopped me & invited me to take in the world. I did but stumbled on the first chord repeatedly. Beginning again one more time I trusted that I could play this, my left hand found the opening chord with ease. After playing David asked me what was different and I told them I was trusting.

When I came home I had no problem beginning this piece solidly five times in a row. After tending to other tasks I again was able to begin this piece well a few more times. So why the difficulty in playing this music for supportive people, two of whom I have grown fond of, and a mirror? What is being reflected that I need to see? What can I not see or will not see?
Posted by Patrick Smith at 7:18 PM 2 comments:

Noticing once again that when I begin talking to myself while playing mistakes happen. A definition of mistakes that I like is that a mistake is information. While I have harvested this information repeatedly and continue to be playing along and the internal dialogue begins, I engage and then flubbed notes. At times I notice the dialogue beginning and I do not engage, the chatter does not pick up enough momentum to distract me.

Ahhhh if the world was perfect, I have a pretty good idea how I would spend most of my days. For now the day job is needed and attended to with skill, care, and enthusiasm. Sometimes these hours at work are long and draining. So what to do - practice.

Be it following my breath, playing my guitar, or following my breath while playing guitar. I practice. I've been doing a lot of listening lately, to the tracks from our recent live recordings with Tony. So many days of late I have only had 30 minutes to actually have my guitar in hand. Those minutes are so very nourishing, so very important. Allowing me to occasionally brush against the creative spirit, giving me the strength to attend to another day. Moments, precious moments of life. Music, sweet music.

Release continued to be a theme for today. I was in a colleagues office and saw a book titled The Release of Information ... and I smiled. Took me back to my practice of last night with just those few words of a text related to the legal aspects of our profession. I put in a long day at work today. This was needed, productive, and also very tiring. More and more I feel the toll my professional work takes on me.

After a short nap and dinner I was talking with my wife. She asked me if I felt like practicing. Of course not was my reply, but I will. Tonight there was no resistance to doing an Alexander Technique lie down to begin. Allowing the muscles to slowly unwind and let go of the week was nourishing. I thought of a line from Kenny Werner's book Effortless Mastery: Liberating the Master Musician Within

that we release our concern for sounding good. I thought yes this is some old information I can release for tonight. Just have a little fun with my guitar.

I  moved to the guitar and played through a few pieces. I was enjoying my playing, allowing myself to be gentle and let the music take me. I then decided to play through Beneath Dark Images, a piece which began over a year ago that I found an ending for last weekend. Again just a gentle play through, reminding my body and mind of the piece. From here I moved to a piece form the Frames period that also needs an ending. At one point I found myself grabbing  a couple chords reminiscent of Jimi's Castle's Made of Sand opening, sans the effects. This appeared to fit so I played around with the chords for a while. Then the next discovery which led me to a potential ending for this piece.

I taped this three times to capture the ideas that surfaced tonight. I'll listen back another to hear the results. Smiling I completed my session. I told myself I was too tired to write this, but here I am.

I find myself wondering what more is there to release?


Photo by Mikael Hivdtfeldt Christensen
Posted by Patrick Smith at 8:13 PM No comments:

Having a relatively good practice session tonight. The last few days I have been hampered by effects of a recent medical procedure complicated by tiredness. But tonight I was ready, willing, and able. I began with a 20 minute Alexander Technique lie down. So delicious after a days work to release the muscles of my neck, back, arms, & legs. This also serves to quiet my mind But of course there was resistance to beginning my practice session with the lie down.


Why is this? I know from experience that when I begin with one I am engaged with my body and thus my playing on a different level. But my habit is to rush and to dive in. So I remind myself of my intent to engage with my guitar in a qualitative manner. By the end of the lie down I was asking myself why do I ever resist doing what I know works?

As I moved to the guitar I explored an exercise for my right hand and then addressed some issues in three pieces. Two of these pieces share a similar issue with harmonics. While working with the first harmonic related issue I found myself thinking "release" as my hands moved to invite the harmonic to sound. Success. I continued with this and sensed a freedom in my neck & shoulders. Moving onto the other related issue I again thought of "release" as I moved to play the harmonic. Success and ease spread through this section.

As I moved onto playing through a different piece I found myself thinking about what had just transpired. Wondering if I should write this up for the blog. When I noticed that my playing was being adversely affected I told myself to be quiet and pay attention to what I was doing. Yet the internal dialogue persisted. Why is this happening and why now? I knew I needed to stop playing and re-center myself.

I can not change this problem of internal chatter while playing from within the problem. I must pause, find my breath and body and allow the chatter to dim. I know this from experience, yet over and over again I attempt to "muscle through" in a sense and continue to play and continue to chatter. The acot of pausing is another form of releasing. This particular release took me to my computer to begin capturing and examining this experience. Now I may resume my guitar work.

What are you releasing? 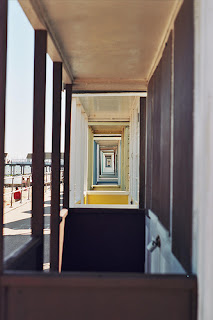 There are possibilities I played and I am sure more is available, just not tonight. But I trust the process; I trust the creative spirit. The outcome is not as important as allowing myself the opportunity and the freedom to explore.
Posted by Patrick Smith at 7:14 PM No comments: