Swimming in an Ocean of Music 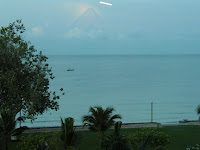 After warming up tonight I decided that it would be good to record takes of what I will be recording with Tony Geballe later this month. I do rough takes often these days to capture ideas that I am working on. Generally these takes are for my own listening, perhaps my wife if she is in the car. I was a bit amazed when I hit record tonight at the mental activity that ensued. Something about knowing that someone else would be listening to these takes as my plan was to email them to Tony to give him an idea of the music we will be recording.

Eventually I got up to stretch and practice Qi Gong to get my energy flowing and my mind and body harmonized. At one point I was just moving in a swimming manner, when the notion that I am swimming in an ocean of music came to me. I suggested this to myself when I returned to my stool. This quality of swimming in music rather than playing my guitar brought out a sensitiveness in my movements which was lacking earlier. Prior to recording the following takes I allowed my hands to gently move to and fro and sense the energy mount. Then I brought them to my guitar. I will work with this notion more.

Takes of three pieces were recorded. Soon to be sent off to Tony.

Are you swimming? Stay tuned.
Posted by Patrick Smith at 5:01 PM