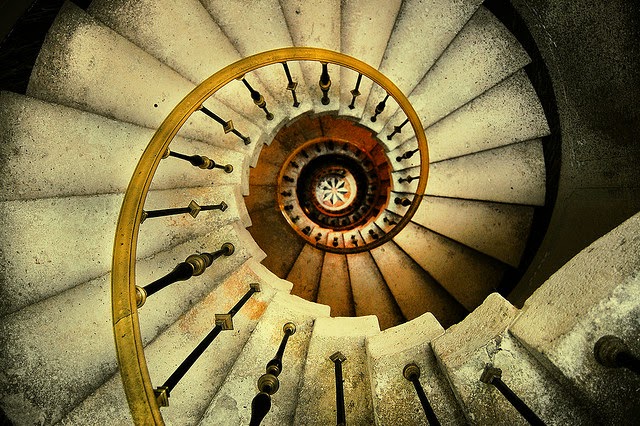 Inhibition is the space between stimulus and response. More precisely, it is the ability to stop, and to delay our response until we are adequately prepared to make it. Inhibition gives us a chance to stop responding habitually, and allows us the chance to have new and improved patterns of movement. - Bill Plake


This morning I was working on a difficult section of Turning the Wheel which quickly fatigues my left hand.  The fatigue arises from having the second and fourth fingers "anchored" on the fretboard throughout the piece.  Initially part of the fatigue may have been a result of the strain of maintaining the rhythm of seven throughout these arpeggios.  While the fatigue has lessened as I've become more comfortable with the piece, there is still a couple transitions that are problematic.

The first one comes a third of the way through the piece where the anchor changes from an interval of a sixth to one of a fourth.  As I began to review this I decided to begin with the last arpeggio before the switch and to practice inhibition in the sense taught in the Alexander Technique before making the transition.  The first three times I did this I notice a slight release in my neck and a tendency to "shorten" my right arm in anticipation.  Allowing the neck and arm to release and lengthen first, I then executed the transition gracefully.

On the fourth attempt I inhibited, allowed the release and choose to do nothing, removing my hands from the guitar.  The next effort I inhibited, did not notice any holding on and then played the transition.  Then on the following inhibition I choose to smile and then not play.  A " negative direction" arrived to play with - I am not holding onto playing this part right.  What freedom this imparted.  One more attempt to apply inhibition and again I choose to do nothing but smile.  While smiling I noticed various photo's in my practice space of friends and loved one.  Immediately I felt supported in these efforts with applying AT, but also supported in the very best sense of the word - by love.

Adding a twist of applying the inhibition before the last few notes of the arpeggio, instead of at the bar line.   This allowed me to actually make the transition "in time."  Then I moved further from the transition point, playing more of the piece to see how this impacted my use when I inhibited.  Valuable information was being processed and my choice one time was to burst out in laughter, a good liberating belly laugh.  I began the piece from the beginning and while getting close to the bar where I would pause to inhibit, I came up with the clever idea of inhibiting my practice of inhibition.  A bit of pride manifested as I chattered in my mind and of course I blew the transition.  At this time I decided it was time for an AT lie-down.

During the lie-down, I decided to continue practicing with inhibition but to let go of working with Turning the Wheel.  To allow the work that had been done to go into long term memory and revisit it in a day or so.  I moved onto working with a part of Stepping Stones, remembering to smile and not take this work, nor myself too seriously.

Photo by Andre Bohrer
Posted by Patrick Smith at 6:49 PM