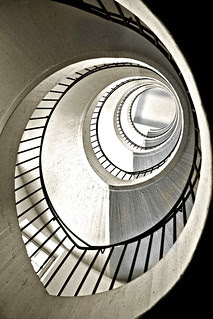 What happens when I get lost in the edge of uncertainty?

My body contorts, breathing is held, emotions flutter and my brain, well frankly I am uncertain what my brain does or does not do.  Why this set of psycho-physical reactions? Does one happen before the other or do they all arise simultaneously?  What if I were able to maintain my freedom at the 'edge?'   Instead of spinning out of control, what if I spiraled out, slowly evolving in somewhat of a pattern?

Can I make friends with the edge, my edge?

After generating these aforementioned questions, I decided to do an Alexander technique lie down.  As I lay down on the floor, the idea that I could visualize improvisations while in this very free state of the lie down arose.  Deciding to play with it, I first thought through the lie down process, allowing my body to lengthen and widen and to let go of unnecessary tension.  I began to improvise using my mind. At times I was hearing it, while at times I was seeing my fingers making choices on the fretboard. Other times it was a combination of both.

As this mental improvisation developed I noticed activity in the area of my chest and though it was not necessarily fear, some type of emotional response was developing.  Smiling, why with just this exercise on the floor would any type of emotional activity arise?   Ah, this creature I inhabit is always puzzling.  As I played with this improvisational exercise, I decided to bring my arms up from the floor mimicking the position I would have when playing the guitar.  Why not bring whatever habitual bodily identification I have regarding improvisation on the guitar into this exercise?

After writing this I was ready to pick up the guitar, and then I recognized an opportunity to inhibit this choice.  Applying the AT directions, I again noticed this activity in the area of my chest.  Perhaps I'm just overloaded from a long week.  Or I may be probing an area that elicits a negative distracting reaction to my actions.  Or both.  Since most of my weeks are overloaded with stimulation, there is no way to rule this out.  Might I approach the edge of learning how to better live within this life of mine.
All of this from a simple withholding of implementing my act of picking up the guitar and working with the Alexander Technique instead.  Deciding that another lie down is in order I head for the floor.

During this second lie down I again experimented with visualizing an improvisation. My body was not as overwhelmed with tension this time and relished the opportunity to release even more.  There was no emotional flutter associated with this set of imagined improvisations.  I rose from the floor and decided that I would now pick up my guitar and explore improvising.  Should I mimic one of the visualizations or find a new beginning?

I began with using the AT directions and began to play in the high register.  Gently probing what was there, I noticed the freedom in my use from the two lie downs and continued directions.  There is a definite positive effect from keeping the AT directions alive over time.  After exploring a few improvs I noticed that I was beginning to hunch inwards.  Why this drawing in of my body?  Am I "protecting" myself with this action?  Taking a short break, I then came back and decided to explore this further.

This next improvisation began to come alive.  I turned on my recorder.  Almost immediately the music stopped.  Was this the affect of my effort to capture?  Or the set of ears eliciting something negative in me?  I continued to play and explore, slowly moving out to the edge.  Music seemed to arrive again, with my body relatively free and my mind engaged, I let come what may.  Then I began an improvisation based on the structure of Gathered Hearts.  After some gentle meandering, again something came alive.  Letting go of this, I then played Gathered Hearts and then improvised some more.  I realized that in a sense I had "spiraled out" towards my edge.  Preparing the body and the mind with the lie downs and visualizations and then introducing the guitar.  Stepping out towards the edge, and then a break, followed by more steps.

A lot of questions and an approach that led to positive experiences.  More to follow I'm sure.  Stay tuned,
Posted by Patrick Smith at 7:24 PM