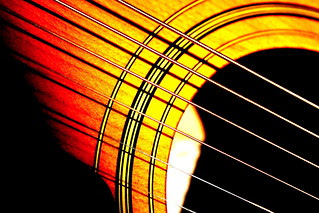 I found this link called Six String Scales on twitter this evening and decided to check it out. Basically the exercise involves playing each degree of the scale once on each string. I decided to test my fretboard knowledge post by Simon Powls can be found here.

After exploring variations on the exercise I began to play triads containing the same note, for example A, and moving around the fretboard. I was not playing inversions of the original chord my restriction was to quickly find an "A" on a different string and for it to be in a different relationship within the chord than the last one.  After 5 chords I switched to " B" and so forth.  A fun change of pace to my usual practice.
Posted by Patrick Smith at 6:40 PM