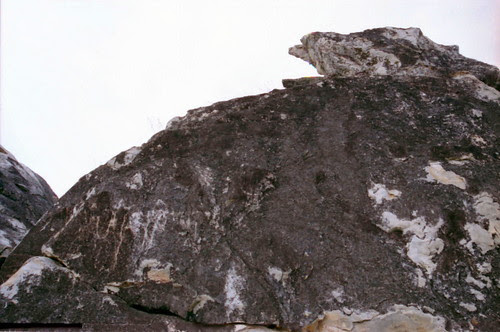 While I was stuck in traffic, I began visualizing a section of music that I am having difficulty playing.  At one point during my visualization, I had a sense that I did not understand what my right hand was doing nor what my right hand needed to do.  I noticed I was tensing a bit, even though I was not actually playing.  Employing the Alexander Technique, I found length and width within myself.   As I began the visualization again, I only went as far as the bar where the confusion was.  Now I at least knew where the issue began.

After dinner in the back yard on a beautiful spring evening, I decided to practice out on the porch.  Between the breeze and the singing birds, I just had to be outside.  I played through several pieces that I'll use in a performance at the end of the month. After taking a break, I began to investigate the right hand confusion that my morning visualization had revealed.  Deciding to incorporate the AT practice of inhibition,  I played the four bars leading up to the confusion and then paused.  Doing this several times I saw what my right hand was actually doing.  I continued to play these four bars and then inhibit playing the next one, until I had a sense of how to proceed.  The issue arose after arpeggiating 3 bars in the same pattern, then strumming four strings, and following this by playing two different artificial harmonics.  By inhibiting the movement to the artificial harmonics, I found where my right hand was, and then could think about how to attack the harmonics.

Once I worked out the movement, I began to play the part through.  Pausing between parts to direct via AT, I began again, and decided to skip the third bar.  I played the harmonics well, and then continued to play with skipping bars and adding bars and varying the bars leading up to the strum in a myriad of ways.  By taking these different paths to the transition I was practicing, I was hoping to obliterate the muscle memory that had become associated with this particular transition. While gaining confidence, I was also enjoying this impromptu approach immensely.  Grateful that good work had been done, I completed my practice in time to watch the second half of the Celtics/ Heat game.

Happy that I stumbled upon this photo of Vulture Peak in India. This is where the Buddha inspired Avalokitesvara to give the Heart of the Prajnaparamitra Sutra

, which in the words of Thich Nhat Hahn is "Avalokitesvara precious gift to us, the gift of fearlessness." Amen.
Posted by Patrick Smith at 7:22 PM