Movin' On With AT and The Piece 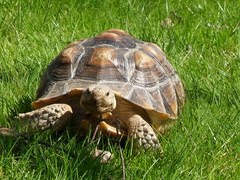 A beautiful Easter morning with breakfast in the back yard as the birds sang.  Sounds of neighborhood children shouting joyfully as they found another egg brought smiles to my face.  Then off to work on building a tree house for our granddaughter.  My role, primarily to hold the heavy timbers in place until they were secured.  Frequently during this patient labor I practiced AT, as the level was used and screws found and drilled into place.  I'm not used to this kind of labor anymore, and though I may be stiff tomorrow, I'm certain the AT work affected my use positively today.

We arrived back home beat and happy.  After shower and dinner, I hit the floor for a lie down.  My back so grateful for the support, as I contemplated my body.  Slowly but surely the spine lengthened, the back widened, and my shoulders released.  When I rose, I was still tired but restored.  Moving to my guitar, I began to improvise a melody, just having fun and being open to the possible.  I began to work on the Etude in 7, but my heart was not into this.  Pausing to direct via AT and take in the space of the room, I decided to work with Movin' On.  I worked with this for close to 40 minutes, exploring and looking for where this might go.  Then a simple chord inversion opened another door.

A quick break to extend Easter Wishes via the phone to family and a friend and then I returned to the guitar.  Movin' On began to develop further.   An interesting chromatic melody emerged taking the piece in a direction I was attracted to.  I noticed that my back and  my left shoulder were tired so I hit the floor for another lie down.  Happy that the piece was developing; grateful I had the sense to pause and take care of my body.   After the lie down,  I played through the new section a few times and found a possible ending.  Turning on the tape machine I played through the piece twice.  During the second take at least two happy accidents occurred, breathing more life into the notes.  Letting go of the guitar, I listened to the final take, satisfied with what I had captured on tape, I completed my practice.
Posted by Patrick Smith at 6:06 PM