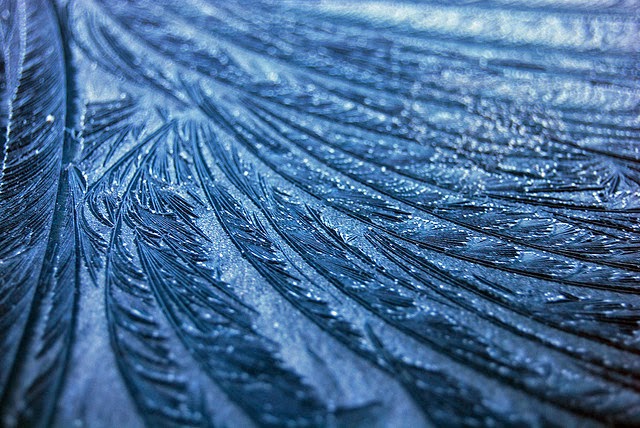 Ice Feathers was the title of a photo I used earlier this week.  Both the  photo and the title intrigued me.  While looking at the photo, I began improvising, reminding me of last years challenge proposed by  Sid Smith  of composing a piece of music inspired by photo's he had taken.  A possible introduction followed by an interesting progression had me notating what I'd found.  Revisiting the idea the past three days, my interest has been sustained but the idea was not taking off either.

I returned to this idea yesterday after undertaking the previously described work on Forgive Me.  I was primed by the energy.  I played around with the structure of the introduction.  Back & forth, maybe, maybe not.  So I played with the progression.  This became increasingly interesting musically, but while the rhythmic feel of it was compelling, something else was needed.

Watching yet another snowfall in our backyard, I played with my fingers on the strings.  Just caressing them, wondering about them.  Each snowflake uses only the energy needed to reach the ground and no more.  What was the energy needed to move this piece along?  Watching the snow I held the musical questions of this piece.  Playing the beginning again, an idea flew by and I followed.  Liking what I heard I played around with the idea and extended it.  Slowly the energy was building.

Time for my afternoon walk, especially to relish in the snowfall.  As I walked I played the piece in my mind, searching for where we might go together.  Nothing.  Walking the snow covered streets and hearing the idea again.  Hearing a slight change arise, I kept walking, kept listening.  Another idea arose, one I could not really hear, but I understood the gist of the rhythmic change.  Arriving home I played with these ideas and may have found an ending.

Posted by Patrick Smith at 8:20 AM