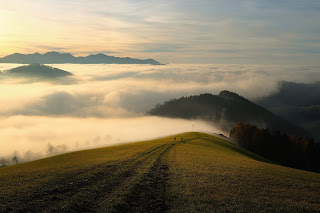 As I began to warm up this morning I decided to play pieces I know well and allow freedom in my performance of them. What I mean by this is to do things with my body and facial expressions that I do not do in performance. This comes from one of Wesley Balk’s aphorisms “In rehearsal do what you can not do.” This aphorism is paired with “In performance allow what you can do.” Playing A Journeyman’s Way Home while dancing about my studio, then Gathered Hearts and Passages.

Allowing this joy and fun to enter me is something I need to cultivate further. As soon as I began to play Day Two I noticed the effect that my previous fun had on my tone. Searching began with a glow, but by the end I was thinking about playing rather than playing. Not necessarily a bad thing, I’m still learning how to ease into this particular piece. Playing What Is This? while reading the score the thinking amped up. Not in a useful way at all. I even made a note to myself as I paused: Patrick - what makes you think you can play while carrying on this conversation in your head about other people? Fortunately I was able to calm the noise.

Without thought I found myself improvising. I liked what I was hearing and followed along. After about 15 minutes I knew not where to take this, but made some notes. After a walk with my wife I had an appointment with a friend to listen to one another works in progress, but this fell through at the last moment.

How to turn a seeming disadvantage to our advantage arose in my mind. Back to the earlier improv. Moved it forward and gave it a working title of Entangled. Later in the evening another look at this opened up a new view of where to go next with it.

Photo by shogun
Posted by Patrick Smith at 6:22 PM