Collapsing on the Music 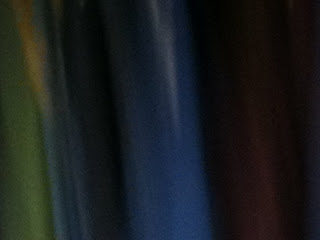 Last night after posting, I played through the new musical idea a couple more times before retiring.  While preparing to go to work this morning, I heard in my mind a possibility of where this may lead.  Now while tending to my professional duties another possibility emerges in my ear.  I always love how the brain continues to work on these musical challenges away from the instrument.

I rested after my post work dental appointment and reluctantly moved to my guitar.  The cumulative tiredness is still weighing on me.  From experience I know to just pick up the guitar anyhow.  Pausing for a few minutes, I tuned, and then began looking at the new piece.  The ideas from earlier today either did not now capture my attention or I was no longer hearing them as I did.  The good news is that I had the guitar in my hands and I was searching.  Reminding myself that the journey is the path, I explored what I had.

At one point an idea sparked a bit.  Excited I began exploring this, when I saw that I was collapsing around my guitar.  Pausing to give myself the AT directions I then moved to play again.  Almost immediately I collapsed again.  Recognizing that I was beginning to "end gain," I paused.  Bringing my attention back to my body, noticing that my emotions were becoming attached to a 'successful' outcome, I practiced inhibition with returning to the guitar.  Making the decision to play, but then choosing to move my hands away from the guitar.  Another decision to play and stretching my hands toward the ceiling instead.

Then I felt my feet on the floor, allowed my body to lengthen, and brought my hands to the guitar.  Playing, but paying attention to how I was using myself.  As soon as I noticed I was collapsing, I paused and began again.  Feeling energized now, I began the piece again, and the magic happened.  My hands played something new, something musical.  Immediately my concern shifted to will I remember these new phrases.  Pausing, finding my length, I began to play again with the recorder on.
Unconcerned with the absolute capture of the music, I saw that when I focus on remaining free in my use, something shifted positively to allow music in.

Another example of what Robert told me concerning music.  That he knew that music was always available, he could trust that.  The question was am I available to music?  The question remains.
Posted by Patrick Smith at 6:53 PM