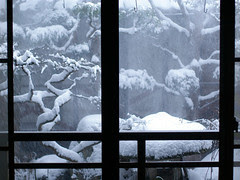 A relatively gentle day, once I was able to begin it properly.  Qi Gong and sitting with my wife finally got me grounded this morning.  Just being with her, tending to our home, cooking, and allowing one another space was wonderful.  Two naps interspersed with watching a basketball game and even some uncharacteristic football watching, the Ravens that is, my hometown team.

I began randomly playing intervals and singing them tonight.  Thinking of my daughter-in-law and the book she is writing, I then played through Kinnara, which was inspired on one of our visits to Cambodia. I followed this with Gathered Hearts and Broken Wing.  Then I began playing the beginning I found last night.  On the first play through, a found a new approach to it.  After playing with this and recording it, I began to notate the opening theme.

And then it hit me.  Can I compose a piece of music inspired by the death of a prostitute on an episode of CSI Las Vegas?  Many of my pieces have been inspired by loss, or another personal experience, even a title from a poem.  Film and television shows are drama.  They do recount human experiences, complete with the attendant emotional cues and responses.  Yet somehow this feels very strange to me.  However that will not keep me from investigating this piece further.  Should I call the piece Nick's Song?
Posted by Patrick Smith at 6:56 PM